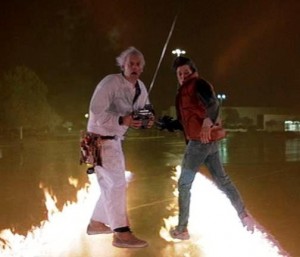 After reading this article about the latest crazy theory on why we can’t yet prove the Big Bang, I couldn’t stop thinking about Romans 1:22. That is “Professing to be wise, they became fools.” Read on and see if you don’t agree.

Then it will be time to test one of the most bizarre and revolutionary theories in science. I’m not talking about extra dimensions of space-time, dark matter or even black holes that eat the Earth. No, I’m talking about the notion that the troubled collider is being sabotaged by its own future. A pair of otherwise distinguished physicists have suggested that the hypothesized Higgs boson, which physicists hope to produce with the collider, might be so abhorrent to nature that its creation would ripple backward through time and stop the collider before it could make one, like a time traveler who goes back in time to kill his grandfather.

Holger Bech Nielsen, of the Niels Bohr Institute in Copenhagen, and Masao Ninomiya of the Yukawa Institute for Theoretical Physics in Kyoto, Japan, put this idea forward in a series of papers with titles like “Test of Effect From Future in Large Hadron Collider: a Proposal” and “Search for Future Influence From LHC,” posted on the physics Web site arXiv.org in the last year and a half.

According to the so-called Standard Model that rules almost all physics, the Higgs is responsible for imbuing other elementary particles with mass.

“It must be our prediction that all Higgs producing machines shall have bad luck,” Dr. Nielsen said in an e-mail message. In an unpublished essay, Dr. Nielson said of the theory, “Well, one could even almost say that we have a model for God.” It is their guess, he went on, “that He rather hates Higgs particles, and attempts to avoid them.”

This malign influence from the future, they argue, could explain why the United States Superconducting Supercollider, also designed to find the Higgs, was canceled in 1993 after billions of dollars had already been spent, an event so unlikely that Dr. Nielsen calls it an “anti-miracle.”…

Dr. Nielsen and Dr. Ninomiya have proposed a kind of test: that CERN engage in a game of chance, a “card-drawing” exercise using perhaps a random-number generator, in order to discern bad luck from the future. If the outcome was sufficiently unlikely, say drawing the one spade in a deck with 100 million hearts, the machine would either not run at all, or only at low energies unlikely to find the Higgs.

Sure, it’s crazy, and CERN should not and is not about to mortgage its investment to a coin toss. The theory was greeted on some blogs with comparisons to Harry Potter. But craziness has a fine history in a physics that talks routinely about cats being dead and alive at the same time and about anti-gravity puffing out the universe…

Dr. Nielsen admits that he and Dr. Ninomiya’s new theory smacks of time travel, a longtime interest, which has become a respectable research subject in recent years. While it is a paradox to go back in time and kill your grandfather, physicists agree there is no paradox if you go back in time and save him from being hit by a bus. In the case of the Higgs and the collider, it is as if something is going back in time to keep the universe from being hit by a bus. Although just why the Higgs would be a catastrophe is not clear. If we knew, presumably, we wouldn’t be trying to make one… – NYTimes: The Collider, the Particle and a Theory About Fate

And if the Universe COULD travel back in time to protect itself… why hasn’t it stopped global warming?  ;)

Incidentally, we can rest assured that these Physicists are crack pots as the Higgs search collider not only is online but now has the record for most energetic collision ever.  Unfortunately no particles from the future have yet shown up to either protect or destroy John Conner.