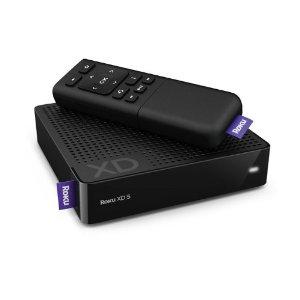 After owning a Roku for about a month, I thought I’d post a brief review for those considering the Cadillac option.  I opted for the XDS for the ability to play movies from a USB as well as Hulu & Netflix. (Or when Comcast decides it’s internet should go down because it’s a Tuesday…)

Setup is simple but somewhat slow with needing logins and device codes for every channel you add.  You’ll want your laptop handy when setting up your Roku to somewhat speed up the process.  But its not that bad, as most people are only really going to care about like 6 of the channels.  I really don’t need another way to get short, random, useless internet videos in front of me (sorry indie channels).  In fact, I might pay you to keep them away from me.  ;)

The real difference for XDS over the other Rokus is the USB. I have been moving my large (legally obtained) movie collection from DVD to computer files and thought that would suppliment the streaming options. Unfortunately, I can’t get the Roku to even read any of my several flash drives.  I have tried reformatting them every way I know how – including some random Western Digital tool suggested on the Nets. Since the Roku won’t recognize the flash drives, I can’t see how movies from USB play (if at all). So at this point, I paid $40 extra for a feature that doesn’t even sort-of work – even with an evening dedicated to making it happen.

Engadget in its Roku review claimed the USB option would come out of Beta “this fall” which seemed optimistic at the time. I figured end of the year would be a good target for Roku what with 100,000 Rokus getting unwrapped around that time.  Sadly, the year is ending without so much as hopeful PR statement from Roku.

Sure the Netflix streaming works great but you can say that for a thousand other products today, so I wouldn’t buy the more expensive Rokus until the extra features move out of “coming soon” status.