VO2 max is a measure of the maximum volume of oxygen that your body can use. As you increase your exercise effort, the amount of oxygen you consume increases to meet the greater demand to produce energy. However, there is a limit to each person’s oxygen consumption, and therefore a ceiling on your energy production and sustainable exercise effort. This measure which is computed in milliliters per kilogram of body weight per minute (ml/kg/min) is commonly used in running and to a lesser extent in cycling.

While some sports scientists argue that running performance is often first limited by other factors, such as muscle adaptation or running efficiency, others believe VO2 max is the key physiological determinant of an athlete’s running performance. Because of this many GPS enabled training watches (attempt to) track this metric. Below is a look into my Garmin’s Fenix 2’s sad attempt to determine my VO2 Max over the last year of training for an Ironman. 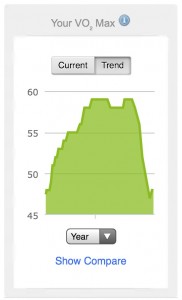 While Garmin’s literature claims it computes one’s VO2 max due to a fancy algorithm analyzing only your heart rate monitor data, the sharp cliff on the end of the year view pic proves otherwise. The first dip in my otherwise rapidly rising maximum was when I took a run outside instead of on my treadmill. Seeing the change, I followed up with several more outdoor runs which resulted in my meteoric fall from VO2 max greatness. Apparently my Garmin was guesstimating my treadmill speed at much faster (and slower) than was, in fact, occurring. I hadn’t noticed this fact as my supposed 4 min mile pace runs were being offset by my 0 mph walks in my interval training. This resulted in a believable average pace (when I occasionally looked at it). But since I was mainly using the Garmin for the heart rate data and my treadmill for speed data it took that long for me to notice the issue.

Since learning of this, I’ve purchased a footpod and calibrated it so that the Garmin Fenix 2 accurately captures my indoor speeds.  Sadly, even though my resting heart rate is on the verge of cracking into the 40s (stupid 50 bpm barrier), the Fenix 2 now reports my VO2 max as 43 placing me in the bottom 40% of men my age. Which is hopefully active men my age or its even more depressing.

As far as I can tell, the fancy algorithm is primarily looking at how fast you run for a sustained period to create this make believe number. This means 1) it requires a calibrated footpod to even have a chance of working indoors and 2) it really needs you to run at a constant pace – intervals really confuse it. So while this metric is worthwhile if properly measured (i.e. a sports facility treadmill test with a tube measuring your breathing), I’d take the “estimated” values with a large bag of salt. For a cheap and easy alternative metric grab something like this $20 pulse monitor and track your resting heart rate.