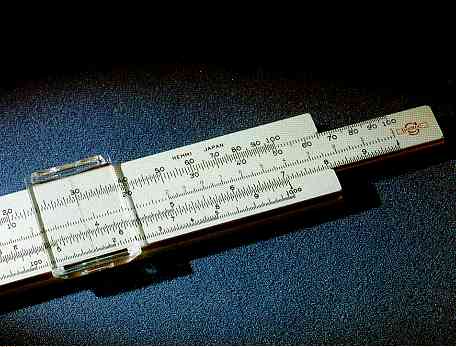 Recently, I have been doing some consulting for a large organization with a large engineering contingent.  Walking through one of the buildings there, I saw a huge slide rule hung on the wall like art.

For those of you that don’t know what a slide rule is or what it is used for here is an image and a short explanation.   Back when computers were the size of buildings and the calculator hadn’t been dreamed up yet, engineers needed something to help them with their constant calculations and the abacus wasn’t cutting it: the slide rule was born.  Using logametric scales, this ruler looking device somehow makes complex calculations easier much like MS Excel today.  As historical proof, the Apollo missions to the Moon were powered by slide rules (and rocket fuel) since the average smart phone is more powerful than the sum of NASA’s computers at the time.

Anyway, you can now see why an engineer might consider a slide rule a clever piece of work place art.  Seeing said artwork made me think “Oh Dad would love that!  I need to send him a picture text…” and I started to take out my iPhone before I remembered that Dad can’t get texts anymore. I’ve actually made this mistake a lot lately, so I began pondering why that was the case.

After some thought, I realized it was because I truly believe that Dad is alive (in heaven) that my brain doesn’t really see him as dead like most might conceptualize but really just “out of cel range”.  I liken it to how we were out of range when we went on one of our Manly Man Trips to Boundary Waters.  This manly fishing trip involved us taking a plane to Minneapolis, then takin 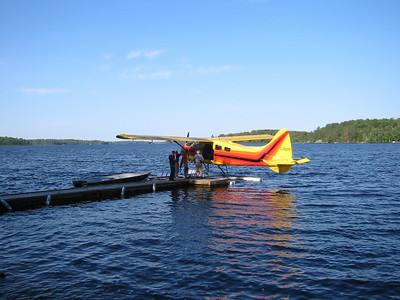 g a two hour taxi cab to the near the border.  From there we took a puddle jumper into Canada to a small Lodge, then took a speed boat as far out as it could go, at which point we grabbed our gear and canoes and took a short hike to the next small lake.  Using the canoes and taking short hikes over the land separating the many lakes that make up the Boundary Waters, we made our way into the Canadian wilderness where we would setup camp and start fishing.  Now before leaving for this trip, I had finished all the paperwork to buy my first home.  As always happens with banks, there was some small snag they wanted to go over with me while I was on this trip… the bank being told I was on vacation and unreachable by cel phone was like no really we need to talk to him… to which they were told no really, he is really outside of cel phone range.

During the time I was pondering these things, I heard a famous preach ask “what happens to us when we die?”. “What happens?” he continued, “Everyone knows what happens – they have a service they put you in a box and they put the box in the ground. And yet mankind by and large continues to ask what happens when we die…”

An interesting question when you think about it really.  Is it that we just need to attend more funerals to see if there is any variation or is it that something in our soul whispers that there is more to come?

After going through my father’s cancer battle and death, one of my biggest realizations is that I couldn’t imagine going through it and not “knowing that I know”. I am still young enough that I haven’t had to attend many funerals or confront death that often. Even still I have seen and heard many people talking about a recently deceased relative being “in a better place” without much confidence in the statement.  The words are all right but there is something in their voice that questions the truthfulness of their own statements.  For some it is just a touch of doubt but for others it almost seems like wishful thinking.  A shaky hope that the dead are in fact continuing on in heaven (or equivalent nice or at least tolerable place) and that they by extension be ok as well.

Growing up, Dad would talk about “knowing that you know” describing the level of your belief in your faith. (the object of your faith is an important discussion for another time) This is not some external measure of “enough” faith but merely: do you really believe what you say you believe?    For many people the answer is no or at least a halfhearted yes. (funny how we often have trouble being honest with ourselves about our own beliefs)  Growing up in a family where faith was built on facts, the idea of “just have (blind) faith!” was a foreign even pitiable concept. We will never know anything 100% in this life or make any decision with perfect and complete information – that’s just life.  However, it doesn’t mean we have live with 0.01% information – that’s not faith, its simply being lazy or stupid (or both). But I digress.

Having investigated the facts and tested them with experience, I know that there is a God & a heaven & how one “gets in” and I know these things with same certainty that I know the Sun will come up tomorrow.  As a result of this, I know that while my father died and his fleshly body is buried near Big Ed, I know that he is still alive (enjoying his mansion & discussing deep topics with biblical figures & cracking jokes with the King of the Universe).

I hope this post doesn’t come off as too preachy, but again I can’t imagine going through something like a cancer journey without “knowing that you know”.  This Christmas, if you are unsure of what happens when we die or if you are not thoroughly convinced that what you believe is really the reality – take action!  First, realize that you can know.  It is not a matter of just believing more, it is a matter of learning more so that you can actually believe what you believe in.  Second, find someone that can answer your honest questions.  If best answer someone can come up with is something along the lines of “just believe!” ask them “in what exactly?” and then find a new spiritual mentor.

Alright, that’s all I’ve got.  I can tell you that knowing what I know has given me a lot peace in this recent storm and I hope that all of you can feel that peace instead of doubt in your next storm.  Merry Christmas!