Newly elected Senator Bob Corker attempted to reign in the expenses of the Big 3 to achieve long term stability.  Specifically, Corker proposed bringing the Big 3 labor costs more in line with their competition.  Currently the Big 3 spend $70-75/hr in total compensation of it’s workers.  Honda, Toyota and the like only spend $44-48/hr.  Corker proposed lowering benefits to $62/hr by 2010, but the UAW refused to even split the difference.  And those numbers don’t even account for the 700,000 retirees continuing to receive full pay for zero productivity.  The pension plans of the Big 3 add another $31/hr expense to the balance sheet.

Now I know that a lot of people think its unfair to change the pension for people after the fact, and -well- it is.  Unfortunately, if your pension costs drive the company out of business, your benefits drop to ZERO.  It sucks. It’s unfair.  It’s called life. The fact is that both current and former employees of the big 3 are going to need to cut back on their benefits if the companies are to survive.  Here’s one way to lessen the pain: fire your union.  You could drop your pay by your dues and not even see a difference and they are the ones that got you here in the first place.

The sad fact is that the bailout – in a not sane form will eventually be approved.  Because this bailout is as much about the auto industry as it is about the Union Machine.  If all the union companies fail while nonunion ones profit – people might realize that the days where unions were actually needed ended decades ago.  The only people really benefitting from unions are union officials and Democratic campaigns.  Unions paid in $400 Million to Obama alone.  So even if this doesn’t get approved now – it will next month.

Mitt Romney on why a bailout would hurt not help the Big 3:

If General Motors, Ford and Chrysler get the bailout that their chief executives asked for yesterday, you can kiss the American automotive industry goodbye. It won’t go overnight, but its demise will be virtually guaranteed.

Without that bailout, Detroit will need to drastically restructure itself. With it, the automakers will stay the course – the suicidal course of declining market shares, insurmountable labor and retiree burdens, technology atrophy, product inferiority and never-ending job losses. Detroit needs a turnaround, not a check.

I love cars, American cars. I was born in Detroit, the son of an auto chief executive. In 1954, my dad, George Romney, was tapped to run American Motors when its president suddenly died. The company itself was on life support – banks were threatening to deal it a death blow. The stock collapsed. I watched Dad work to turn the company around – and years later at business school, they were still talking about it. From the lessons of that turnaround, and from my own experiences, I have several prescriptions for Detroit’s automakers…

Csaba Csere had an excellent column back in July.  Unfortunately C&D is much slower posting their columns than their reviews online – and I am much too lazy busy to re-type it myself.  However it is now up for general viewing and is even more pertinant given the current Auto Industry problems being eyed for government intervention.

I always thought April Fools’ Day came on the first of that month and Earth Day on the 22nd, but apparently, this year those dates were swapped. How else to explain the proposal, on April 22, of Mary E. Peters, the U.S. Secretary of Transportation, to accelerate by 25 percent the CAFE increases that Congress enacted last year?

With gasoline pushing four bucks a gallon, it’s not that I would mind seeing average fuel economy rise to 35.7 mpg for cars and 28.6 mpg for trucks by 2015, as Secretary Peters proposes. I’d also like to see a big, happy parade of Sunni, Shiites, and Kurds marching merrily together down Yafa Street in Baghdad. Plus, I’d like to see an eight-figure balance on my brokerage statement and Kelly Brook delivering UPS packages to our office. Sadly, none of these events is any more likely than Secretary Peters’s delusions about CAFE.

A perfect example for this would be the legislation that was passed in the hopes to make home ownership “affordable” to those that couldn’t afford it.  Result? Well it took a while to come home to roost but the noble plan cost us all 700 billion dollars and counting.  Remember that as government promises to solve the next problem with a wave of its legistative hand – or rushes aid those in need.

In the Dec 08 issue of Car & Driver, Franz Kafka attempts to answer a question about HHO with the help of an associate engineering prof.  The two end up completely off point and so butcher the response that a corrective response was required.  Both are below:

HO-HO-HHO
What would happen if you inject HHO (oxyhydrogen) into a gasoline-combustible engine? Oxyhydrogen is a mixture of hydrogen (H2) and oxygen (02) gases, typically in a 2:1 molar ratio, the same proportion as water. This gaseous mixture is used for torches for the processing of refractory materials. I have found numerous claims on the Internet (i.e., www.water4gas. com, www.watertogas.com, etc.) that allege mpg savings by installing an HHO injection kit on a common gasoline engine. Thank you for your help, and please consider us working-class schmucks who might buy into this stuff with gas at nearly $5 a gallon!
Brian Gong
Arroyo Grande, California

Sorry, Brian, those claims are bogus, and you need to stop cribbing from Wikipedia. Lest any reader doubt the indomitable authority of Car and Driver, Kafka asked Claus Borgnakke, an associate professor of mechanical engineering at the University of Michigan. For starters, you won’t gain any energy by converting water to hydrogen and oxygen in the car–you’ll end up with less useful energy than you put in because both the disassociation of water into hydrogen and oxygen and the burning of hydrogen are less than 100 percent efficient in real-world conditions. Even if you did have a perfectly efficient process, there would be no energy left over to power the car. Starting with an oxyhydrogen mix in the car is a bad idea, too. According to Borgnakke, “Never try to store hydrogen and oxygen gas together. Hydrogen is much more dangerous than other fuels in that it burns at nearly all ratios with oxygen and has a very low threshold for ignition.” You could use an energy source such as solar power to make hydrogen from water, but that’s not cost effective, and you’re still left with the problem of storage. Kafka will leave the last word to our expert, who says, “Hydrogen is still too costly to store and transport compared with gasoline or diesel fuel.”

Your HHO response in Dec 08 is so busy feigning intelligence that you miss the fact that the specific laws of physics you snobbishly explain – don’t apply to the question at hand: HHO does not claim to create energy out of thin air.  It simply allows more efficient use of the available energy contained in the gasoline.

1) Gas engines divert a constant amount of energy to the alternator that is converted to electrical energy (yes at less than 100% efficiency).  That energy if unused is soon wasted attempting to overcharge the battery.  HHO draws from this waste power to separate the water into its component gases not to “create energy”,  but as a safe, cost effective way to store the dangerous hydrogen.  Only small amounts of the gas ever exist out of the water state as they are fed into the car as created.

2) The Hydrogen gas adds a nominal amount of energy to the fuel air mixture.  Again, energy is not being created here by violating physics any more than pouring an octane booster into your gas tank.  Water, however, does tend to be cheaper than those fancy additives.  However, much like those additives, the energy boost is small as it would take a tremendous amount of hydrogen gas alone to power a car.

3) The real trick behind HHO is the added oxygen in the fuel air mixture.  It is well understood that more oxygen in the engine means more power potential.  Many after market parts exist to pump cooler air or shove more air into your engine for the express purpose of increasing the oxygen amount in the combustion chamber. Where, oh Kafka, are your snide remarks at those products?

The added oxygen increases the percentage of gas burning inside your engine instead of exiting your tail pipe. Again, energy is not being created, rather less fuel (energy) is being wasted.  This increased efficiency translates into more power at the same gas input or better fuel economy at the same power output.  Herein lies the second caveat to HHO: modern oxygen sensors.  While older cars can bolt on HHO and forever enjoy increased efficiency, newer cars will only see improved MPG for a short period until the oxygen sensors compensate with increasingly rich fuel mixtures until the gains are offset.  So if one wants to run HHO in a current vehicle they must also be prepared to alter their O2 sensors with one of the variety of after market methods available.

Perhaps a senior professor could check this one for you.
Scott 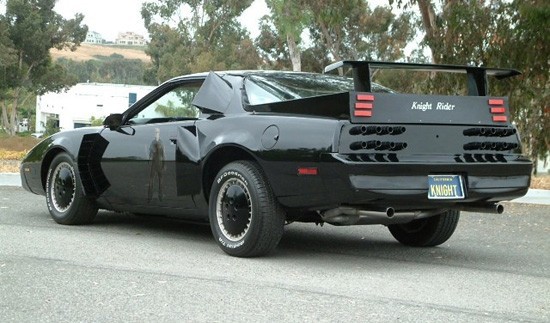 That’s right the actual KITT used in the series came out of the vault and onto eBay….