It’s awesome to see my favorite old car revived as the CRZ hybrid.

Tho I wish it could make 150hp instead of just 122. Still the Fit is pretty peppy with it’s 109hp so it should be fun to drive – and with slightly better mpg than the Fit. Pricing will start a higher than the Fit or the Insight.  I’m just not sure it will be fast enough for me to trade in my 240hp Accord. :D

Especially with the updated Accords now making 268hp.  However, if they made a roadster version of this… I’d be all over it.

BMW next car is the motorcycle your mom would let you ride. :)

Simple is the acronym for sustainable and innovative mobility product for low energy consumption, a vehicle concept combining features and advantages of both motorcars and motorcycles.

Tom Blumer has a interesting perspective on the sharp decline – 42% and 45% – of GM and Chrysler.

No other major maker had a year-over-year September decline that was even half of that seen at GM or Chrysler.

Yet the press, while beginning to acknowledge serious problems at the companies, both of which were first bailed out by the government and then taken through government-orchestrated, contract law-violating, UAW-favoring bankruptcies (GM discussed here, Chrysler here), still will not entertain the possibility, despite the evidence, that consumers are shunning them because of their bailed-out status and their heavy-handed tactics in bankruptcy. – newsbusters.org 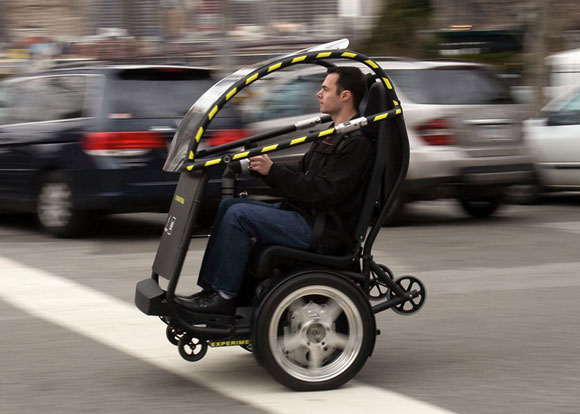 Since the Segway didn’t deliver on the hype to revolutionalize urban areas, the company has partnered with GM to create a “seqway built for two”.

Please hold a moment while we check our calendars. Nope, it’s definitely not April 1. That must mean a General Motors tie-up with Segway must be true. The Personal Urban Mobility and Accessibility Project (P.U.M.A. for short) will seek to develop a self balancing two-wheeled vehicle capable of reaching speeds of 35 mph – well above the Segway’s 12 mph top speed — for 35 miles.

Instead of the more common single track of a motorcycle, this electric vehicle will borrow the side-by-side arrangement popularized on the original Segway Personal Transporter. A lithium battery will store enough charge to allow the vehicle to travel for up to 35 miles on a single charge. Another interesting feature is the expected ability for each machine to communicate with vehicles around it, reducing the risk of accidents and regulating the flow of traffic.