So after hearing about it online and even seeing a HHO Booster working in real life on my good friend’s 4Runner – part of me still couldn’t believe that you could separate water molecules into its component gases so easily.

So I finally got around to grabbing two stainless steel light switch cover plates from Lowes on one of my many visits to the DIY paradise… And you know what? It works.

Using only the two cover plates electrically separated by a bit of styrofoam plate, a water bath with a bit of baking soda, and a couple D batteries I successfully split water in to hydrogen and oxygen. The funny thing is since I didn’t “condition” my plates (get whatever coating must be on them) the gas bubbles all formed along the edge of the plates. But still very cool.

So Hydroxy or HHO is not a scam it actually works. Well at least the water to gas splitting part – wither it will increase gas mileage or usher in a new era remains to be seen.

So as gas climbs to $4 and beyond, suddenly there seems to be a host of companies rushing to the rescue with their enviro-friendly car. So much so that I thought I would assemble them into one place for easy shopping. Interestingly many of these cars are not a friendly to your pocketbook as they are mother Earth.

Tesla just opened a dealership in LA, but there is currently a 1000 vehicle waiting list since production was slowed due to transmission problems. Full production should be back up in December with the backlog cleared up by Spring.

*The claims for both the range on gas and even the gas tank size are all over the place online. The lack of info regarding this on the company web site makes me believe the truth is on the low side of the speculation.

Available “now” according to the company. Expect supplies to be limited until the company can get a full production line moving.

UPDATE: Green Vehicles are supposed to start shipping this July.

This summer should be a hot time for slick phones. The 3G iPhone is due out – hopefully with some additional tweaks. Also the HTC Diamond is getting launched. The Diamond is the successor to the Touch – the closest a windows mobile phone could come to an iPhone.

With a much improved user interface, an accelerometer, and a size that will make iPhone owners jealous – things should get interesting. Below are some comparison shots.

So I’ve realized that one of the main reasons “Do Good-ers” annoy me is not so much that they are trying to help – but that they make suggestions and try to fix things that they really don’t understand. Even a little.

So the following is an example of some do gooder physics I recently had to correct surrounding water powered (HHO/Hydroxy) cars:

4-cylinder engines are nice, because they are slightly more efficient than their V8 counterparts. But take a look at this:

“Only about 12 to 20 percent of the energy originating in the fuel tank is ultimately transmitted through the vehicle’s driveline as mechanical energy to turn the wheels.” – TRANSPORTATION RESEARCH BOARD, SPECIAL REPORT #286

The problem is not the hydrxy… it’s the darn internal combustion engine. It’s only 22% efficient on it’s best day. The three-phase electric motor running my air compressor in the garage is 94% efficient (rated by NEMA).

We can have nice, big cars, with big seats, and nice stereos… we just have to get rid of the piston engine. I wish there was some way to use the hydroxy to EFFICIENTLY assist an electric motor… and leave out the piston engine, except for maybe charging the batteries (like in Bob’s car, only with a 2-cylinger engine). That way, you can make better use of the little power that hydroxy has to offer.

What your missing in your comparison is the efficiency of creating the electricity to power the electric motor. Most electricity is made inefficiently with coal at % I’m sure would make us all cry. But take the solar industry as an easier to quote number. Typical consumer solar cells that are 20-25% efficient at converting energy. The latest and greatest (and crazy expensive)
cells can only reach 40%.

So using cost effective and commercially available numbers for your comparison should really be this:

And this is before we account for the energy transfer loss between the engine and the tires, which is where your combustion #s are counting from (any hot rod tuner will tell you that there is a significant difference between HP at the engine and HP at the wheels). So while you could build a hydroxy generator to power an electric motor car it would be doubtful that it would actually be any more efficient that a combustion engine setup – oh and you would have to build a new car.

If you really want more efficiency, get congress to repeal recent safety mandates so that cars don’t have to weigh 2 tons to be street legal.

This is actually a common thing people miss. 90% of tree huggers assume that an electric car is sooo much greener than a gas/diesel car because it doesn’t burn fossil fuels. Yeah, not in the car. But guess where that current came from? Probably coal.

And this trip down bad physics lane reminds me of another Do Gooder lesson:

If we do end up building a water pipeline down to Atlanta, we should stick some turbines in it. Then we can get hydro power out of it…

That’s great! Too bad it breaks several laws of physics!

Now, to be fair (to me) I had already had a lengthy discussion with this person the last time they invented their free energy from the water tube idea a week earlier. But apparently US energy independence was too important to let a little thing like no knowledge stop one from spreading this breakthrough idea.

Oh and if you don’t understand why the water tube power doesn’t work – don’t try to solve anyone else’s problems today. The world could use a break from the Do Gooders… 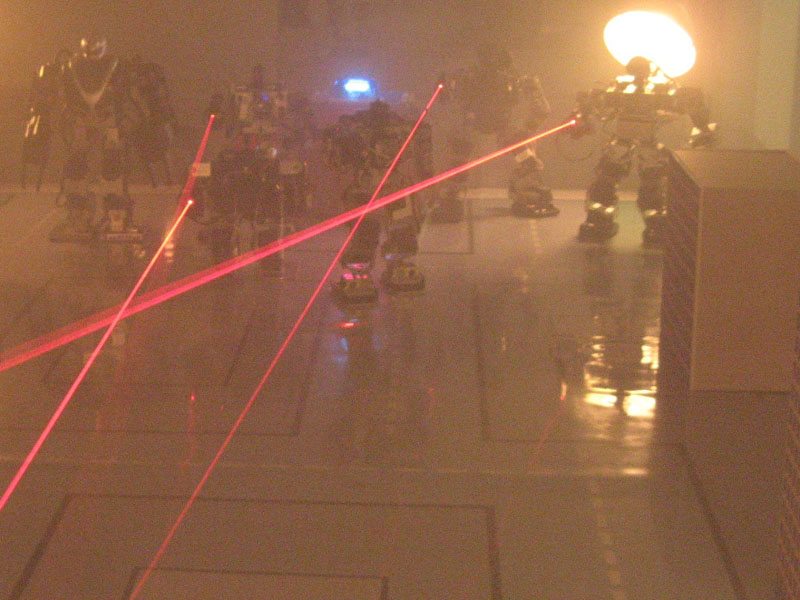 So apparently American Cinema isn’t as big in Japan as it should be. Because the Japs don’t see the sheer folly in giving their robots lasers and teaching them how to fight.